WWE wrestler Anthony Bowens officially came out as bisexual in an essay posted on Outsports.com. Bowens had been keeping his boyfriend a secret from his fellow wrestlers but a video he made with his boyfriend, Michael Pavano, was found by a fellow wrestler.

It was this past fall and I was three months into a relationship with my boyfriend, Michael Pavano. Mike and I had uploaded a video to YouTube on his channel called “The Laughing Challenge,” where he described me as his boyfriend.

Weeks later, I received a text that made my stomach drop.

It was from my best friend in the wrestling business, and someone I specifically made sure to keep my secret from. The text read: “Bro, why didn’t you tell me?” I knew exactly what he meant but I played dumb. “What do you mean?” I replied. He response was that he saw “the video.”

Much to my great relief, he told me he didn’t care and that I was one of his best friends in the business.

He also said that some of the other wrestlers had watched it too and tipped him off about it. I was relieved that he was cool with everything but a bit nervous because other wrestlers knew. It was after this that I came to the conclusion that I had a decision to make.

Sometimes you’re playing golf and there’s a water hazard and you just gotta play through so what’s a man supposed to do? Golfer Shawn Stefani faced this problem during the PGA Honda Classic and decided to just strip down to his boxers and play through. Gary Woodland had a similar predicament in 2016 and dropped trou but Shawn bested him with stripping down to just boxer briefs.

Rickie Fowler may have won the Classic but Shawn won our hearts.

Get this man an underwear endorsement deal and maybe a spread in the ESPN Bodies Issue?

I’d let him sink a ball in my hole.

The NHL may be one of the most inclusive leagues for LGBT fans with teams holding “Hockey is for everyone” nights that benefit the You Can Play Project. The Caps are auctioning off Braden Holtby’s mask he wore during warmups.

Holtby is the LGBT ambassador with Washington for the You Can Play project. The NHL’s Hockey Is For Everyone focuses on social issues such as LGBT rights; ethnicity and gender equality; socio-economic status and those with disabilities. Holtby is also a good friend of the LGBT community marching in the D.C. Pride Parade in 2016.

This is unbelievable. Not only are these guys hot, they are heroes!

A pair of hunky male models were the heroes that saved the six teenagers who fell into the ice at Central Park Monday night.

Ethan Turnbull, 24, was skateboarding with his friend Bennett Jonas, 23, when he saw the teens struggling in the freezing water and decided to take action.

Little did the teens know, two jet-setting models with rock hard abs and chiseled jaws were soon to be their rescuers.

Jonas was the first to jump and said the sight of seeing “6 kids screaming for help being pulled down” was the “toughest situation” he thinks he’ll ever go through.

These hunky models helped save six teenagers who fell into the ice at Central Park https://t.co/VyNRFYYuL4 pic.twitter.com/iVTLDbKW5K

Just a casual Monday, skateboarding in Central Park and they just so happen to save kids drowning in a freezing cold pond.

Enjoy some pics of these hot heroes.

Blink and you miss it @blinkfitness – Commit to be fit 👣 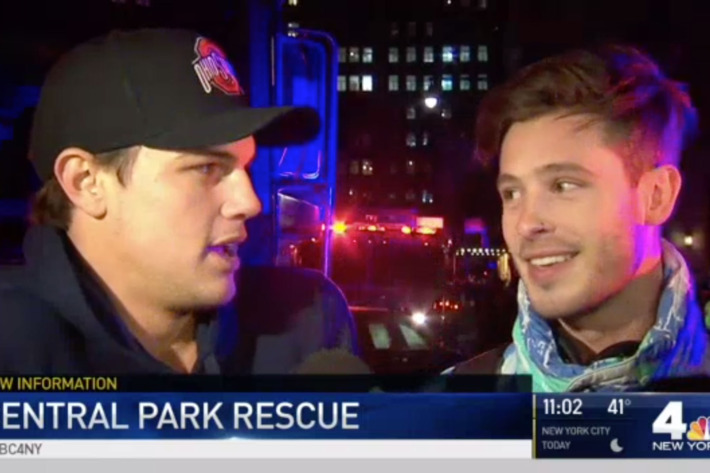 English rugby player Danny Cipriani had his private and NSFW photos leak a few years ago on Tumblr but not many people were paying attention. Well, thanks to the latest #Dickileaks… leaks, Danny Cipriani’s dick pics have been shared with the world, again.

Not only that but we got some hot pics of his peach emoji as well. The pics were taken before he had his sexy tats. I honestly don’t mind tho.

Click below for the NSFW versions of the pics.

Wired has a scary story about DTLA star Matthew Herrick being targeted for harassment on Grindr.

LAST OCTOBER, MATTHEW Herrick was smoking a cigarette in front of his West Harlem brownstone when the first visitor appeared. As Herrick tells it, the man innocently pressed the buzzer for Herrick’s apartment. Then he asked matter-of-factly if Herrick was the one who’d been communicating with him via the hookup app Grindr, and who’d minutes earlier invited him over for sex. Herrick said that he hadn’t—he hadn’t even looked at the app in a week—and asked how the stranger even knew his name. That’s when the man pulled out his phone and showed Herrick a Grindr profile that included a photo of Herrick in his kitchen, taken from his Instagram account, including the 32-year-old actor and model’s face and bare chest. Herrick was unnerved. “That’s me, but that’s not me,” he remembers saying.

Herrick says three more men came to his home that first day, all expecting sex. The next day brought just as many, all of whom referred to the same spoofed account. Herrick reported the fake profile to Grindr, but the impersonations only multiplied. Soon there were eight or nine visitors a day, and then more than a dozen, all finding their way not just to Herrick’s home, but also to the midtown Manhattan restaurant where he worked. The unwanted suitors had gotten his phone number through the app as well, and bombarded him with messages, calls, and pictures of genitalia.

Herrick alleges that his ex-boyfriend is the one making these fake profiles using an Android device that can trick your GPS into being in a different location. This is scary stuff. I can’t even imagine being at work and having 24 guys show up asking for sex.

Back in November, Herrick posted a statement on Twitter after fake Grindr and Scruff accounts were making outrageous statements.

I’ve had a stalker and was harassed online years ago and it sucked. It wasn’t on a dating app and I knew the person who was harassing me which helped in getting a restraining order. It’s different when you have someone hiding behind a fake account and impersonating Herrick to seek revenge.

Matthew is a really good looking guy and I am sure that if I saw him on Scruff I’d totally woof at him. But, the harassment that he has been facing really, really sucks.

Have you ever been Catfished online? Let us know in the comments.

Loving this DISCIPLINE sweater and my y-cut briefs from @rondorff. Get yours …📸: @balance2089 pic.twitter.com/Nc5qugTsDg

I’m hoping that buffalo burgers become a thing at NIU.

The best signing I saw all day was Illinois State signing offensive lineman Kobe Buffalomeat. I mean what a name! Kobe became popular with Kobe Bryant playing with the Lakers and a last name like Buffalomeat makes you sound like a complete badass.

Let’s hope this kid has a good college career and becomes a force to be reckoned with in the NFL in a few years.

Who was your favorite signing this week? Let us know in the comments.